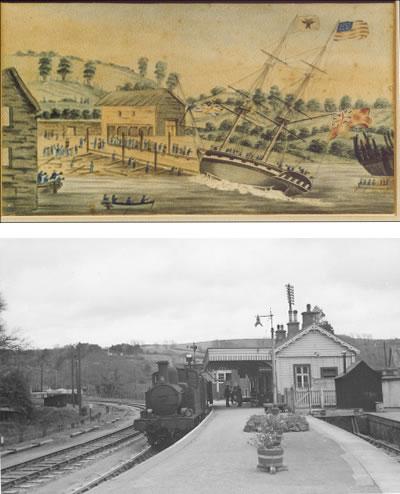 The name comes from the river Caff or Cough which flowed here and the 2 water mills recorded as early as 1272. It was once a busy creek for ship building and maintenance; Nickels, Brokenshaw and Heller had shipyards here, but it gradually became silted up. This is now the main place for the car ferry crossing but it was only moved here from the previous ferry slip nearby in 1976. There had been ambitious plans in 1834 for a bridge over the river here but the cost was too prohibitive and the plans were dropped. Fowey station was on this site before the railway was closed to passenger traffic. In 1972 the whole area was filled in to provide car parking.

The obelisk to commemorate the visit of QueenVictoria and Prince Albert in 1846 was re-sited here in 1977, having been first erected on Broad Slip to be re-named Albert Quay. It had been removed when parking space was needed.